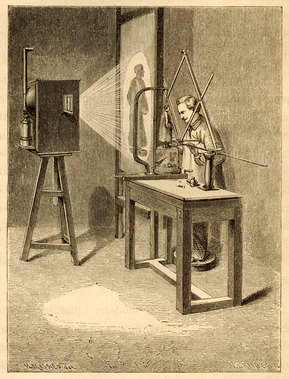 François Willéme pictured with pantograph and lantern projector
To the average consumer 3-D printing appears to be one of technology’s latest and greatest innovations.   There are many features that make it so great, and technological improvements continue to make the 3D printer even more coveted.  There is much focus on current innovations and future innovations, but little mention of its past.

The first concept of 3D printing emerged in 1860, when Parisian photographer Françios Willéme used photography and technology to create a 3-dimensional portraits.  His creation spawned from the belief that, “the sum of the profiles equals the whole volumetric figure.”  Willéme called his invention a “mechanical sculpture”, because by using photographs and a pantograph he could create an sculpture using little handwork.  Unlike traditional sculptures, Willéme’s use of innovation created beautiful and accurate busts in as little as 48 hours, while traditional sculptures took artists many months to procure.

Willéme’s technology changed and improved over time, but his first technique, the mechanical sculpture allowed for quick and cheap prototype busts made out of layers of wood. These prototypes could be later made into molds and casts.  His technique, shows many parallels to the 3-d printing process we use today.

Mechanical sculpture
The process begins with photographing the subject. Robert Sobieszek describes the rather complicated process eloquently, “First, the subject, which might be either living or inanimate, was photographed from as many as fifty positions on a circumference equidistant from the center of the subject. The photographs were then developed, printed, and used as models that were individually outlined onto sheets of wood, metal, or stone by the use of a pantograph.”

Photos of the subject are taken with the subject centered in a circular shaped room, with cameras surrounding him.  The silhouettes from the negatives were then blown up projected onto a screen using a lantern. A pantograph is an instrument made up of hinged and jointed rods in the shape of a parallelogram used for copying images to a smaller scale.  The use of a pantograph, allowed Willéme to trace the illuminated image and copy the trace to a piece of thin wood. He would then carefully saw along the traced line.  He would do this process for each photograph, and when he combined the 50 pieces of wood together, they created a simple statue. He practiced and improved this technique using more photos and pieces of wood and created models that could be cast and molded to create a more permanent bust. 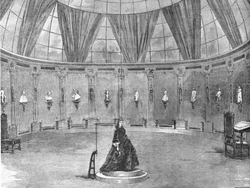 sketch of Willéme's circular photo room
This innovation led him to create his final model and open a store in Paris in 1963.  He built a circular room that hid behind its panels 24 cameras, each placed 15 degrees apart. The subject would sit at the focus of the room and Willéme would take 24 simultaneous photos of the subject. The process took just a few minutes and the photos were taken within 10 seconds.  The subject was finished and would leave Willéme to his work, and could return in a few days to receive the finished product. 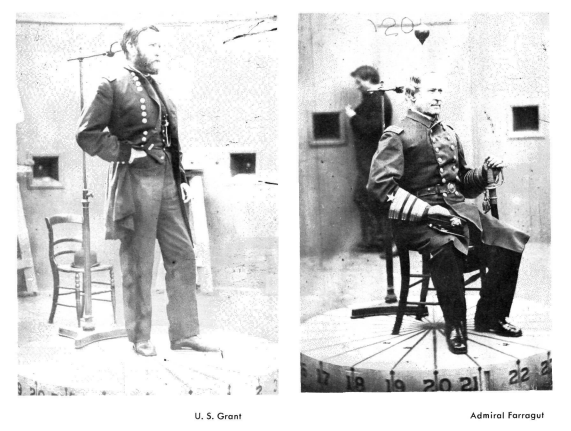 His process with the negatives was similar to before, but instead of using wood layers, he used a clay block. The pantograph was connected to a carving tool, and placed on a circular table that turned 360 degrees, each photo numbered 1-24 lined up with a particular section of clay and he would again trace the outlines of the images. With this method, Willéme ended up with a solid 3-dimensional bust that after a little sanding and defining of the features could be cast into various materials.
﻿
Both inventions were incredibly advanced for their time, and though popularity and funding for his business ultimately failed, his “ system predates machine vision, 3D scanners and stereolithography by a full century.”  The building blocks of 3D printing can be seen in François Willéme’s photosculptures of the 19th Century.

Just as 3D printers are cutting costs, time and craftsmanship today, the photo sculpture was able to create sculptures using minimal skill and hand work, cutting down time, lowering costs and allowing for replication.  3D printers today have the ability to scan existing models. By taking photos around the subject, Willeme was able to combine them and create 3D images of the subject. Just as Willéme’s mechanical sculpture created a model by layering slices of wood, 3D printers build models by slicing the digital image and building it up layer by layer. This process allows 3d printers to be the most effective in building objects quickly and accurately.

This link shows a video of his process recreated and improved upon in the early 1900s, it might be helpful for a visual!
http://www.britishpathe.com/video/photo-sculpture/query/Marcus

3D Printing in the 20th and 21st Century 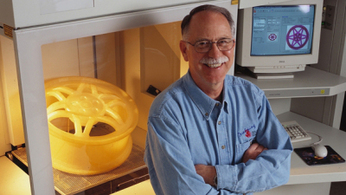 Chuck Hull, the Father of 3D printing
3D printing came back into play in 1972, when Mastubara of Mitsubushi motors proposed the idea that photo hardened materials be used to create layered parts. Ten years later, the first working additive fabrication devices were invented. Charles Hull of 3D Systems invented stereolithography (SLA) in 1984. This technology turns Digital models into solid models by first breaking the digital model down into thin layers and then using a laser to turn liquid photopolymer into a solid object. The machine works layer by layer, dipping the object back into the liquid each time and solidifying the next layer. Because of this groundbreaking innovation, Hull is known as "the father of 3D printing". Here is an awesome video that displays this process

In 1991, Statsys created the first Fused Deposition Modeling (FDM) a process were the material is laid down in layers by a nozzle that injects liquid plastic. Unlike SLA, there is no dipping of the object into liquid, it is instead dispensed similar to an inkjet printer.  Both of these technologies were used widely for rapid prototyping and in manufacturing parts, but were incredibly expensive and not easily available to the average user.

In ’92 DTM produced SLS or Selective Laser Sintering, a 3D printing process that uses powder layers and a laser that solidifies them together. A video of this technique can be seen here

Until 2005, 3D printers are largely unavailable to the public, and are used for rapid prototyping and manufacturing for large companies. The technology is still incredibly complicated and expensive.  This leads RepRap start their first low cost and user friendly 3D printer project that aims to enable more people to use 3D printers. In 2008, they created a printer that can create it’s own parts. In 2008, Stratsys creates a biocompatible FDM material,that enables their parts to be used in humans. (i.e. pacemakers).

In 2008, Makerbot launches Thingiverse, a website that enables users to share 3D model files. One year later, they produce a user friendly printer. Makerbot continues to make top of the line affordable, user friendly 3D printers. Though they still cost $1-6 grand, they are some of the best working and functioning machines on the market, and for their product are quite a good deal.
Powered by