The 3D Printer will undoubtedly be a disruptive technology. We think it might just be the next megamachine. Interestingly, it contradicts previous predictions about the future of manufacturing and offers a brighter, more optimistic version. 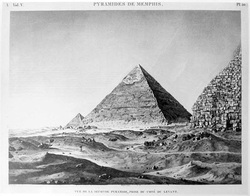 In class we analyzed the “megamachine” which we defined as “an abstract networked and bureaucratic system that built ancient cities, landscapes and monuments” and focused on the success of the Ancient Egyptians in orchestrating masses of people to accomplish both massive and precise engineering feats. Lewis Mumford, an American historian and philosopher of technology praises these ancient societies with producing the first archetypal machine.

The ancient megamachine was a finely tuned algorithm, a bureaucracy of teams, each holding their own specialty that was directed by the King who had divine power. The machine has evolved significantly over time, but the general algorithm remains the same, and it is very much a part of our everyday lives. The 18th century Industrial Revolution in England introduced the use of machine tools in production, along with improved efficiency of waterpower and increased use of steam power. This period is characterized by machines slowly replacing pure human labor in the megamachine. It continues through the 20th century Industrial Revolution in America, which culminates with the adoption of the assembly line. The assembly line lies at the heart of modern manufacturing and is still largely analogous to the ancient megamachine. The assembly line contains specialized machines and workers at each stage that complete a small, specific task that scales to produce massive output. Mumford emphasizes the importance of this history of the megamachine and what we might learn from it:

“To understand the point of the machine’s origin and its line of descent is to have a fresh insight into both the origins of our present over-mechanized culture and the fate and destiny of modern man. We shall find that the original myth of the machine projected the extravagant hopes and wishes that have come to abundant fulfillment in our own age. Yet at the same time it imposed restrictions, abstentions, and compulsions and servilities that, both directly and as a result of the counter-reactions they produced, today threaten even more mischievous consequences than they did in the Pyramid Age” (Mumford, 189).

The trajectory of the megamachine has been to replace humans with consistent and efficient machines in order to standardize and increase output. Mumford’s warning of this “over-mechanized” world is certainly ominous. But 3D printing has the potential to change this trajectory in important ways.

3D printers have found niches in today’s market and are presenting advantages that may be significant enough to cause disruption to the megamachine. The Leading Edge Forum, which defines itself as a “global community whose programs help participants realize business benefits from the use of advanced IT more rapidly” predicts widespread influence of 3D printing.

Parties that had no manufacturing capabilities before are finding great advantages in 3D printers. In traditional manufacturing, that synonymous with the megamachine, capital costs are extremely high, and once built, factories are usually only capable of producing a single product. In comparison, a desktop 3D printer is simpler, cheaper, and allows the user to produce a huge range of products. For these reasons, the earliest adopters of the technology are small businesses and entrepreneurs, as well as schools and hobbyists.

For example, check out Melissa Borrell, a jewelry designer who is taking advantage of 3d Printing.
Or Check out this violinist that is playing an entirely 3D printed instrument.
Or even a Dad who is now able to print and try out several new prosthetic hands for his growing son.
But larger manufacturers cannot ignore these advantages either. A significant disconnect exists today in the way we produce products and the kinds of products consumers want. The Leading Edge Forum’s report explains: “Today’s consumers clamor for customized products and services and for speed of delivery. Yet customization and immediacy—right here, right now—are not economical with traditional manufacturing processes, which are optimized for large volumes of consistent output in a factory far away” (Koff, Gustafson 2). 3D printing is optimized to produce batches of one and because of this, it seems inevitable that this technology will be utilized to match consumer demand. The report predicts, “Opportunities to complement existing manufacturing will emerge. This may be through leaner methods, hybrid machines, or changes to the supply chain or design process” (Koff, Gustafson 3).

In adopting this technology, to maximize its usefulness, significant changes must be made to the supply chain. LEF explains the extent of the influence of 3D printing: “Flexibility to build a wide range of products, coupled with the fact that 3D printing can be done near the point of consumption, implies a serious change to supply chains and business models. Many steps in the supply chain can potentially be eliminated, including distribution, warehousing and retail.” (Koff, Gustafson 3). Ashlee Vance, writing for the New York Times, envisions similar widespread influence for 3D printing: “by doing away with manual labor, 3-D printing could revamp the economics of manufacturing and revive American industry as creativity and ingenuity replace labor costs as the main concern around a variety of goods” ( Vance "3D Printing Spurs a Manufacturing Revolution").

The Diagram below, from the LEF report depicts an important benefit of 3D printing, its efficiency, as well as the extent of the disruption it could cause.

While these changes may seem far-fetched today, the Leading Edge Forum assures that 3D printing has all the right signs of a highly disruptive technology: “3D printing will not be stopped. Competition will drive the market forward, and over time barriers will come down. History has also shown that once a disruption starts, adoption occurs much faster than anyone imagines possible” (Koff, Gustafson 3).

This disruption will, and has already begun, to drastically change the megamachine that runs our lives today. If 3D printing runs the course we expect it to, our economy will be based on creativity and design. Producers develop dynamic designs using hi-tech software to develop a model of their product and then make it available for mass-download across the country. Manufacture will happen in batches of one, if not directly in the users home, in local stores and by small businesses that own their own printer. This is hardly reminiscent of the assembly line, or any descendant of the megamachine that built the Great Pyramids. The Economist printed an article that describes this transition: “The wheel is almost coming full circle, turning away from mass manufacturing and towards much more individualised production” ("A Third Industrial Revolution”). The over-mechanization that Mumford warned against will be curtailed. A new network will take the place of a megamachine, and instead of concentrating power in a divine ruler, or perhaps one CEO, it will delegate and diversify producers and consumers. The megamachine, and manufacturing as we know it, will be democratized.

In changing the shape of the megamachine, the adoption of 3D printing will revolutionize design in the modern world. 3D printing will make co-creation feasible, whereas before it was nearly impossible because customization in a factory is not an option.

With 3D printing, collaboration between designers and customers is not only an option, but a requirement. Alice Rawsthhorn, also writing for the New York Times explores this change in the design process: “rather than expecting to control the final form of their work, designers will have to devise ways of enabling other people to personalize it, both for stylistic and functional reasons” (Rawsthhorn, "Catching Up to 3D Printing"). This might be modifying a kitchen tool to fit your hand, personalizing a phone case, or fitting a robotic hand to its users arm. Because of this, designs will likely need to be an assemblage of parts, this will allow a user to either modify a specific part, or replace it if it becomes lost or broken. Check out how Jay Leno used 3D printers to restore his 1907 White Steamer buy scanning and printing specific parts.

With this co-creation between designers and users, the design of each product will be ever evolving. The continual process will ensure the very best solutions for an individual user are found and adopted as rapidly as possible.
Powered by